Recently I’ve been inspired by the wonderful art of the Australian natives — often called “Aboriginal Art”. The roots of this style actually goes back over 40,000 years to the first people who settled Australia. I’ve created a Pinterest board, where I have been collecting examples of Aboriginal and derivative art: https://www.pinterest.com/sharongiles/dot-line-painting-dot-deco-aboriginal-tribal/

The methods are simple but the results are spectacular. Using basic shapes, dots, lines and much repetition (such as haloing), you can create wonderful nonobjective art or abstract subjects, such as animals, people, etc. The techniques are also called “Dot Painting” and the style has been adapted worldwide. I’m calling my version “Dot Deco.”

The wonderful portrayals of the native Australian animals was the first thing that attracted me to this style, so I began by trying to portray North American animals using this method. I started with an Armadillo (very Texan), but have explored a few more. Last month I taught a class called “Dreamtime Creatures” based on this.

I did two different versions of a wolf howing at the moon – one with metallics and iridescents. Plus a roadrunner that morphed into a totally imaginary bird. The works are done in acrylic and some of them have dots added using dimensional paint (puff paints.) 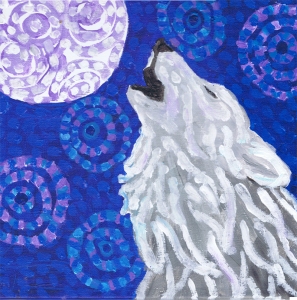 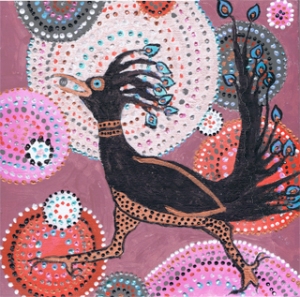 I’ve also ventured into abstract florals. I haven’t found any examples of floral art done by native Australian but the subject is something that calls to me. Here are two examples, both done on black backgrounds: 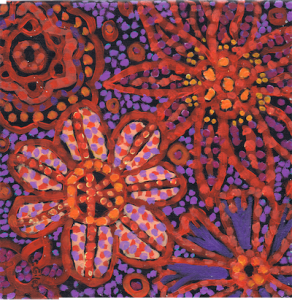 I am working on more Dot Deco (cats!) and will eventually add these to my Etsy store.